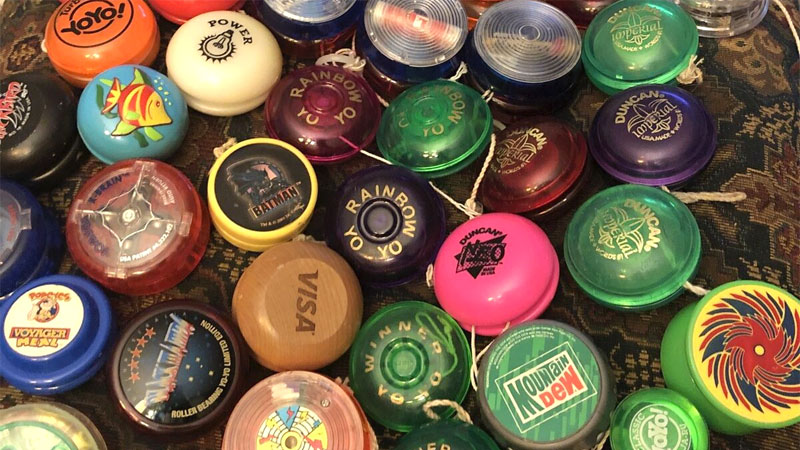 Found within the halls of the toy museum are many items which we might not consider to be toys. Among the greatest toys in history is the cardboard box, which is meant for transporting and storing goods. There’s also the baseball bat, which exists to fend off zombies when your chainsaw’s out of fuel. But then we have the yo-yo.

You might be surprised to know that the yo-yo (AKA yoyo) is thousands of years old and some versions are used to this day as a hunting tool. These toys are so popular that there are international competitions (for money)! In fact, the yo-yo can be quite complex.

Let’s take a moment and look at 15 different types of yo-yo and what makes each special. This traditional yo-yo is very different from what you might picture. Instead of having two discs, this toy has two sealskin balls connected by twine made from caribou sinew. The lengths between the user and each ball are different lengths to allow them to pass each other without colliding. It’s related to the bola and was originally used for hunting.

The goal of this unusual yo-yo is to make the two balls spin in opposite directions simultaneously. A variety of ball shapes are available, and there’s even a rarer three-ball version.

As expected from yo-yos, there are a variety of tricks that can be performed. But what really makes this yo-yo stand out is how intricate some are, making them into functional art.

This fairly recent innovation is very useful for those who do tricks that require a long sleep time. The bearings are kept in a channel and add momentum to the yo-yo to keep it spinning longer.

By adding thick lubricant to the bearing, the sleep time can be reduced. Meanwhile, adding a thin lubricant or removing all lubricant can result in less responsive behavior and a longer sleep time. This popular yo-yo shape is popular with beginners and advanced enthusiasts alike.  The space between discs is wide, and the discs themselves are flared outwards. This makes the butterfly yo-yo very easy to use while also allowing for more tricks.

Despite not being as cheap as the classic shape, the butterfly yo-yo can be found in almost any toy store and is currently the most popular shape available.

The Chinese yo-yo is a very peculiar design compared to the western yo-yo. Usually made of wood, these more closely resemble spools or dumbbells, with a wide axle and two discs that can vary in thickness.

They run off of the same principles as the diabolo, and are considered an ancestor. The modern Chinese yo-yo features an axle and two opposite-facing cups that are manipulated using a string connected to two hand sticks.

This yo-yo is much younger than the western version, with the oldest known records dating back to the Ming Dynasty. Many early examples were made of bamboo with holes drilled into them so they produced a pleasant sound while being used.

In fact, many of the names for the Chinese yo-yo reference bells. It was first introduced to the West by Father Amiot who wrote about it while in Beijing in 1792, before bringing examples of this and other items back to Europe. This is the yo-yo you’re most likely to find at any toy store. They can be made of metal, plastic, or wood and have a narrow gap between the discs. Their affordability makes them a great choice for beginners or those only interested in learning a few tricks.

However, the narrow gap provides trick limitations that make them less attractive to advanced enthusiasts.

Based on the Chinese yo-yo, the diabolo is very different from most designs. It has a small bobbin for the axle and two cups instead of discs. The cups face away from each other and can be made out of a wide range of materials, including rubber.

Unlike regular yo-yos, the diabolo isn’t attached to a string and instead is manipulated by a separate string attached to two hand sticks (with a few variants using only one stick).

In order for the diabolo to balance on the string, the syringe must be manipulated in such a way that it makes the diabolo spring. Once spinning at a sufficient speed, it’s possible to do a number of tricks. While The size, weight, and shape can vary greatly, all diabolos require a fair amount of skill to successfully use. This composite yo-yo is no longer in production but made quite an impression during its existence. It uses injection-molded plastic with metal powder that could be added before or during the injection process.

The metal flakes eliminate the need for adding metal rims for weighting. It also has more flexibility than metal yo-yos, resulting in less stress from impacts.

Despite originally being fairly inexpensive, the rising production costs meant that manufacturers were having trouble keeping the retail price low. Eventually, production of these yo-yos completely ceased. However, if you’re lucky enough to get hold of one, it’s well worth the investment.

The choice among most professionals, metal yo-yos aren’t cheap. The heavier weight means these yo-yos are more balanced and steady than wood or plastic.

Amateur enthusiasts may find it harder to control, but experienced yo-yoers will find the loner spin time makes for more trick options. On the downside, metal yo-yos can easily be dented or scratched on impact, despite being highly durable overall.

It’s not unusual for people to modify things, and the yo-yo is actually no exception. In fact, many popular modifications have since been introduced into the manufacturing process.

A prime example is the recess, which creates recesses so the response systems (such as friction stickers) are less likely to come into contact with the string. There are numerous tutorials on how to mod your own yo-yo available, allowing you to alter the yo-yo to better perform certain tricks.

At first glance, these look just like the classic shape. They have the same barrow gap and have similar limitations because of it. However, the discs are more rounded than the classic shape, giving them an advantage when it comes to doing loop tricks. Few materials lend themselves to a good yo-yo like plastic. Plastic is both durable and lightweight, plus it’s far cheaper to produce, making this the most popular material for most yo-yo enthusiasts. In fact, most professional yo-yoers got their start with a plastic model.

That said, plastic isn’t as useful once you hit more advanced levels. The material is more slippery, resulting in a weaker grip. Also, the lighter weight means you have less control, resulting in increased wobble during spins.

These problems mean that you’re unlikely to see plastic yo-yos being used at competition levels, although some pros still keep one around for practicing with.

One of two major subgroups, the responsive yo-yo is just what it sounds like. These yo-yos will return with a slight flick of the wrist. They’re quite popular among beginners, thanks to the quick return time.

Most toy stores sell responsive yo-yos. Note that there are many mechanisms available that can affect response, such as brake pads.

You’re not likely to find these ancient yo-yos on the market and for good reason. In Ancient Greece, children who came of age often gave one of their toys as an offering to certain gods to symbolically reflect this change of status. Terra cotta yo-yos were often given in place of ones used for actual play.

However, it’s believed that terra cotta yo-yos were fully functional and there are depictions of them being used. The fragility of this material means any such use was rare, and other materials used to this day were far more common in actual toys. One of the oldest materials used, the wooden yo-yo is still popular to this day. They come at a moderate price and are lightweight without being as unwieldy as plastic.

Wooden models are almost as durable as plastic in most cases, but may be chipped or scratched. Variations include lacquered, unlacquered, and layered plywood.

While suitable for beginners, the narrow channel of wooden classic or modified yo-yos can make it difficult to string if you’re just starting out. They’re also not as stable as metal yo-yos. However, many traditionally wooden yo-yos such as the Chinese yo-yo have more unique shapes that make up for many of the drawbacks of western yo-yo styles.

Unresponsive yo-yos certainly aren’t for everybody. Unlike responsive yo-yos, these have a much slower and smoother throw, but require more skill to use. Once the yo-yo is sleeping, it has to be rewound manually.

They also tend to be more expensive. However, there’s a huge advantage when it comes to tricks that require a longer spin time, making them a popular choice among advanced yo-yo enthusiasts.