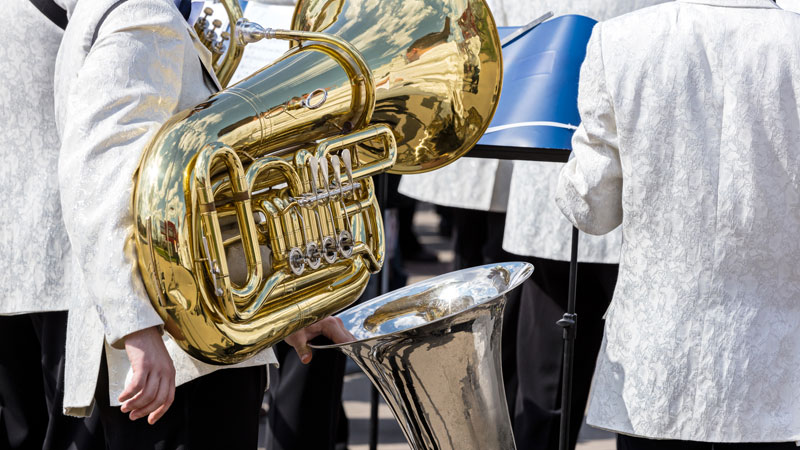 One of the more unusual types of brass instrument, tubas are literally a form of trumpet that’s so long it has to be compressed into its trademark spiral or oval shape so it can be wielded. Most tubas are made of brass, although some now have fiberglass construction.

Fun Fact: If you were to unravel a tuba, it would measure 10 to 18 feet long from mouthpiece to bell (the mouth of the instrument)!

Invented in 1835 by Johann Gottfried Moritz and Wilhelm Friedrich Wieprecht, the tuba has expanded into a fairly large family of instruments. Along with the saxhorn family, these were the first brass instruments to use valves, allowing for a greater range of notes.

Each member of the tuba family is tuned to a different key or combination of keys (most commonly B♭, C, E♭, or F) and most commonly have four to five valves. Three-valve tubas do exist, and all professional tubas have five to six valves.

There are two major categories of tuba: orchestra (AKA concert) and mobile. Concert tubas are almost always placed on the lap to play, while mobile tubas are either small enough to carry around or designed to wrap around the body.

Most tubas can generally be further classified as either upright (the bell faces upwards) or forward (the bell faces forward, although some (such as the helicon) have a different orientation.

Tubas also use an unusual quarter-based measuring system, with common tubas being rated 4/4, the smallest being 3/4, and the largest 6/4. These sizes have no actual standard, meaning a 6/4 from one manufacturer might be listed as a 5/4 from another. An orchestra tuba is designed to sit on the lap of the player and is generally too heavy and bulky to carry around while playing. Despite the name, these tubas are also used in smaller performances and are sometimes given the more general nickname of “concert tuba” by enthusiasts.

Most early music for the tuba was written for a bass tuba, and this has kept the instrument from becoming extinct in favor of the contrabass tuba.

Most professionals keep both bass and contrabass tubas on-hand, as the smaller bass tuba (consisting of only 12-14 feet of pipe) is a full octave higher than the contrabass and far cheaper.

Perhaps the single most common tuba in use today, contrabass tubas are the type of choice for most professional tubists. They are usually tuned to the keys of B♭ or C, and many other forms of tuba which use B♭ are also referred to as contrabass due to the low key but aren’t the same as an actual contrabass tuba.

It should be noted that many Western orchestras tend to use the C contrabass over the B♭, while many European orchestras and the bulk of school orchestras prefer B♭ contrabass models. This tuba comes in all four sizes, with 4/4 being the most common.

While most models use four piston valves, some of the most expensive professional models employ five to six valves. While students can purchase a cheaper version for as little as $900, most professional-grade contrabass tubas will run between $10,000 and 40,000.

Smaller and an octave higher than the bass tuba, euphoniums get their name from the “sweet sound” they produce. This small family of tubas are sometimes referred to as tenor tubas, and are almost always in the key of B♭.

Their small 10 to 12-inch bells make them more mobile than most orchestra tubas. Variations in this sub-family include the compensating euphonium, double-bell euphonium, five valves euphonium, and marching euphonium.

The unique sound allows euphoniums to be substituted for both bass tubas and trombones. It is regarded as very difficult to learn in comparison with its siblings.

Depending on whether it’s a marching or orchestra version, the euphonium weighs up to 25 pounds and will cost between $3,000 to 10,000. Three-valve beginner models may be purchased for as low as $600.

The smallest of all tubas, flugelhorns are easily mistaken for trumpets and are indeed often played by trumpeteers. Most have three-valves, with a few having four, and all give off a sound similar to a mix of french horn and trumpet.

Usually tuned to B♭, these tiny tubas weigh as little as seven pounds and will cost as little as $300 to 400, with the most expensive models running up to $6,000.

While not technically a tuba, the ophicleide is considered technically extinct today but was the first widely-used brass instrument dating back to the early 1800s.

Its design inspired the bass tuba and was itself inspired by a rare (but still used) instrument called the serpent. The last ophicleide was produced just prior to 1900 and surviving instruments are found almost exclusively in museums and private collections.

This instrument had a complicated hey system similar to that of modern saxophones, but was an upright design. It was keyed to a tenor B♭ and was relatively difficult to play.

Another extremely rare type of tuba, the subcontrabass is a behemoth upright model standing over eight feet tall and weighing over 100 pounds. It has a 40-inch wide bell and requires up to three people to play.

There are approximately six known to be in existence, two of which were commissioned by Sousa. All are tuned to BBB♭, and is an octave lower than the contrabass.

Only one subcontrabass is currently in use. It belongs to Harvard University and was one of Sousa’s. The instrument is occasionally brought out for special performances.

The Wagner (or Bayreuth) tuba is a famous hybrid partially developed by composer Richard Wagner for the Ring Cycle, although it was also given roles in other compositions.

It’s largely unused today, and its three-valve rotary system is less popular than piston valves. The horn is available in B♭, F, or a model that can switch between the two.

Despite its beautiful sound, there is a lot of ongoing controversy among brass enthusiasts on whether or not the Wagner horn is an actual tuba. Wagner named it such because of the upright design, although it is more closely related to a French horn.

It’s possible to purchase Wagner horns, although it must be done almost exclusively through commission from European manufacturers.

Used almost exclusively in marching bands (high school, college, and others), mobile tubas are exactly what the name implies – tubas that are lightweight or designed to wrap around the tubist for easier transport.

Due to their more specialized use, there are only three types of mobile tuba. However, some similar horns, such as certain kinds of bugle, are sometimes confused with mobile tubas.

Once considered the gold (brass?) standard for marching bands, the helicon has a very circular shape and is almost always a four-valve design tuned to be used as either bass (E♭) or contrabass (B♭). While not common, baritone, tenor, and soprano versions do exist.

Still quite popular in many parts of Europe and Slavic Asia, the helicon is on the smaller side, with a bell ranging from 18 to 25 inches, and weighing 16 to 22 pounds.

The bell itself has changed orientation over the years, with earlier models (including the prototype for the sousaphone) having upright bells that earned it the nickname of “rain catcher”. Newer incarnations usually have the bell facing more forward or to the side at an angle.

Because they’ve been largely replaced by the sousaphone in the Americas, helicons are relatively cheap and sold in online outlets as a specialty instrument for between $2,000 and 5,000.

One of the most unusual members of the tuba family, the marching tuba is a modified contrabass tuba which is tuned to B♭ or C and has been designed to be carried on the shoulder so it can adhere to strict drum and bugle corps guidelines.

The peculiar orientation and shape has earned it the nickname “contrabass bugle”, although it isn’t actually related to bugles.

Created in the 1960s, the marching tuba runs between $2,500 and $10,000 and its ¾ version is more popular than the standard size (which is almost identical to a contrabass tuba in weight and size).

Traditionally, these instruments only use three valves in a trumpet-like format, but four-valve models are slowly gaining in popularity.

In 1893, J.W. Pepper created a prototype modified version of the helicon for John Philip Sousa, AKA the American March King.

The prototype used several ideas by Sousa to create an instrument that remained above other instruments, regardless of whether the tubist was sitting or standing. The design was refined in 1898 into the modern sousaphone by C.G. Conn.

Sousaphones are rather unique, even in the tuba world. They have the largest bells (30 inches or wider) with almost all models having only three valves. Most sousaphones are contrabass (B♭), although there are exceptions.

A traditional brass sousaphone weighs between 35 and 45 pounds and will cost between $3,000 and 9,000. However, fiberglass versions have become popular in school marching bands throughout the United States, as they weigh only about 20 pounds and cost between $500 and 5,000, although professionals tend to avoid these due to a depreciation in sound quality.

When travelling to the Phillipines, one should be careful in mentioning their love or dislike of tubas. This is because the Tagalog word tubâ actually is the name of a type of sap-based alcohol.

There are many variants of tubâ, including some non-alcoholic ones, and many Hispanic countries produce their own versions.